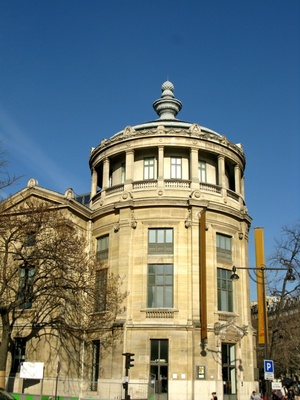 History of the Museum

The MusÃ©e Guimet was the brain-child of Emile Guimet (1836-1918), a Lyons industrialist who devised the grand project of opening a museum devoted to the religions of Ancient Egypt, Classical Antiquity, and Asia. Guimet visited Egypt and Greece before traveling around the world in 1876, stopping off in Japan, China and India. In the course of his travels he acquired extensive collections of objects which he put on display in a museum opened in Lyon in 1879. These collections were subsequently transferred to a new museum which he had built in Paris and which was inaugurated ten years later, in 1889. During Emile Guimetâ€™s own lifetime, the museum, while maintaining a section devoted to the religions of Ancient Egypt, increasingly focused on Asian civilizations.

This new policy followed on from a series of expeditions undertaken in various regions of the Far East. Already, Louis Delaporteâ€™s journeys in Siam and Cambodia had provided a collection of Khmer art forming the nucleus of the Paris MusÃ©e Indochinois at the TrocadÃ©ro, founded in 1882. Towards the end of the 19th century, the Louvre Museum, for its part, opened a section within its Department of Objets dâ€™art, devoted to the arts of Asia-principally China and Japan-and this was later to become the Department of Asian Arts. Guimet himself allocated less and less museum space to the religions of classical antiquity in order to exhibit the objects brought back from Korea by Charles Varat. In 1912, series of religious iconographies were withdrawn to make room for the collections of Tibetan art which Jacques Bacot had assembled in the course of his missions.

In 1927, the MusÃ©e Guimet came under the administrative control of the French Museums Directorate and obtained large collections of objects that had been brought back by major expeditions to Central Asia and China, such as those undertaken by Paul Pelliot or Edouard Chavannes. Furthermore, that same year, the museum received the original works that had previously been exhibited at the TrocadÃ©ro MusÃ©e Indochinois. And, throughout the 1920s and 1930s, its collections were enhanced by a wealth of material from the French Archeological Delegation to Afghanistan. Joseph Hackin, at the time Director of the museum, and also in charge of the archeological excavations in Afghanistan, supervised major alteration works, including the roofing over of the central courtyard in 1938 in order to display part of the Khmer collections. The MusÃ©e Guimet acquired a worldwide reputation for its rich collections of art from the Indianized civilizations of Asia.

From 1945, within the framework of a massive reorganization of the French national collections, the MusÃ©e Guimet transferred its Egyptian pieces to the Louvre and, in return, received the entire collection of objects from the latter museumâ€™s Department of Asian Arts. Between then and 1953, under its Director, RenÃ© Grousset (Grousset having taken over from Joseph Hackin who had died in 1941 along with his wife in the service of the Free French forces) it became one of the worldâ€™s leading museums of Asian art. Grousset was succeeded by Philippe Stern, an international authority on Ancient Cambodian art who, between 1954 and 1965, attached particular importance to developing the museumâ€™s research activities, its library and, above all, its photographic archives.

In 1965 Sternâ€™s successor, Jeannine Auboyer, was particularly responsible for enhancing the collections in the field of Classical Indian art. In the late 1960s, she supervised major alteration works designed to provide the museum with office space and new reserves, while in the following decade a new museum layout was introduced, stripped of the original neo-classical decor. In 1986, Jean-FranÃ§ois Jarrige, a specialist in the ancient archeology of the Indian subcontinent, took over from the Sinologist Vadime Elisseeff who, after a long period in charge of the MusÃ©e Cernuschi, had been appointed Director at the Guimet in 1982. In 1991, in an annexe at NÂ°19, Avenue IÃ©na, the museum, in collaboration with the sadly regretted Bernard Frank, Professor of Japanese Civilization at the CollÃ¨ge de France, opened the Buddhist Pantheon, displaying a selection of the original collections brought back from Japan by Emile Guimet.

The opening of the Pantheon was part of a general policy- following on the footsteps of illustrious predecessors-aimed at consolidating the museumâ€™s eminent role as a learned institution, and at the same time catering to an increasing public interest in Asian civilizations. The museum collections have been enriched thanks to financial backing from the French Museum Acquisition Funds, and to the generosity of the many donors whose names are acknowledged in the main entrance hall. The aim of the vast museum renovation program-adopted in 1993, initiated in 1996, and recently completed-was to ensure that the institution founded by Emile Guimet can increasingly assert itself, in line with the efforts of all its previous Directors and curatorial staff, as a major centre, in the heart of Europe, for the appreciation and knowledge of Asian civilizations, while also taking into consideration the latest developments in museum science and new requirements for the display and conservation of artworks.

The architects, Henri and Bruno Gaudin, together with the team of curators, have given priority to natural lighting and to the creation of open perspectives within the 5500m2 of permanent gallery space. This new, pleasantly open and serene layout will make it easier for visitors to grasp the inter-relationships and differences between the various artistic traditions of Asia. With this major program of works, the MusÃ©e Guimet has now completed the total reorganization of its interior spaces since it was founded over a century ago.

The Museumâ€™s galleries are accessible to all; wheelchair lifts are provided at the museumâ€™s entrance

Metro: stations IÃ©na (closest) / TrocadÃ©ro / BoissiÃ¨re
Bus: numbers 63, 82, 32, 22 and 30
Underground parking is available on Avenue KlÃ©ber and Avenue George V (near the place de lâ€™Alma).
Taxis: there is a taxi stand on Avenue dâ€™IÃ©na in front of the museum.

A restaurant is available on the lower level of the museum.
No admission fee is necessary and it is open the same hours as the museum.

A 90-minute audioguide which will introduce you to a selection of the museumâ€™s masterpieces is available at the entrance to the museum. The audioguide is free upon presentation of your ticket. The commentary lasts approximately 90 minutes and is available in French, English, German, Spanish, Italian, Chinese et Japanese