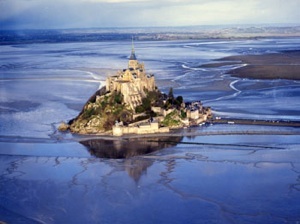 The essence of the monument

Welcome to the Abbey of Mont Saint Michel, a place of legends…

Rising from a hazy expanse of sand and waves, Mont Saint Michel appears like Manâ€™s defiance of the elements and of time. A rock lost in a landscape smoothed by the wind.
Suspended high on the rock, the abbey calls you to discover the wild ambition of its builders and of those who, since 708, had wanted to make this isolated spot a meeting place for all people.
From the top, everything looks surprising: the prodigies of medieval architecture, the strength of nature, the light…
No one can remain unmoved by the message of this place.
As a UNESCO world heritage site, the abbey of Mont Saint Michel is a monument for everyone.

In 708, a dream led Saint Aubert, the bishop of Avranches, to create a shrine to Saint Michael at this site. Mont Saint-Michel then became one of the major pilgrimage destinations in medieval Christendom.

In 966, the Duke of Normandy entrusted the sanctuary to the care of the Benedictines of Saint Wandrille. The monks built a magnificent abbey which the Middle Ages considered as the image of the Heavenly Jerusalem on earth. In the 11th and 12th centuries, they constructed a Romanesque monastery with the church on the top of the hill. A part of this abbey burned down in 1204.

It was replaced by the famous “BÃ¢timent de la Merveille”, a building constructed north of the church in a few yearsâ€™ time that includes halls for the pilgrims and rooms strictly reserved to the monks (scriptorium, refectory). Then from the middle of the 13th century to the beginning of the 16th century, the monks completed the ring around the church on the east and south by constructing the abbotâ€™s residence and buildings to house the abbeyâ€™s legal and administrative services. During the Hundred Yearsâ€™ War, the village at the foot of the abbey was surrounded by massive ramparts.

The heroic resistance of Mont Saint-Michel to the English made the abbey a national symbol. The choir of the church, which collapsed in 1421, was replaced in peacetime by a Flamboyant Gothic structure. The abbey is thus an exceptional example of the full range of medieval architecture. In 1790, the monks left their monastery which was then used as a prison until 1863.

After it was designated a historical monument in 1874, major works were undertaken to restore the monument to its former splendour.

Prepare to be moved as you enter this church that was built in 966 by the first Benedictine monks in place of the oratory erected by Saint Aubert in 708-709. As a result of restoration work carried out by the Monuments Historiques in 1960 you can now see the altar and the remains of Saint Aubertâ€™s sanctuary.

The abbey was built between 1023 and 1084 and is situated at the summit of the rock.
Admire the light-filled nave with it four bays and above all the magnificent transept crossing.
The high vaulted ceiling with its multiple arches, several of which are moulded, make this building one of the finest examples of Roman art in Normandy.

Visit the covered walk and admire this fine hall with a double nave, a masterpiece of medieval art.
Here you can see one of the first experiments in gothic vaulting, supported in this instance by Roman walls

This monastery, whose powerful exterior buttresses emphasise the vertical thrust of the building, was built in record time between 1212 and 1228 by Philippe Auguste.
The name of Merveille (â€œmarvelâ€) was given to this masterpiece of monastic architecture at the end of the 17th Century, since previously the entire Mount was known as La Merveille

See the listing of the Hotels in Mont Saint-Michel