The Gardens of the Boves in Arras 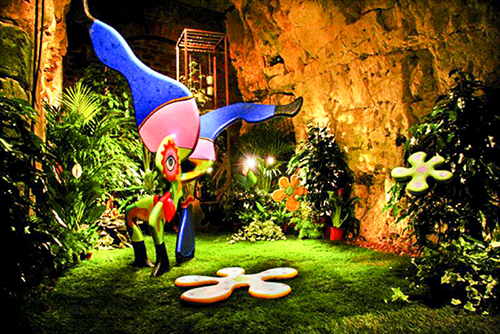 Sixty feet below the streets of Arras, the capital of the Artois province, lie â€˜les Bovesâ€™ â€“ the medieval limestone quarries which were first excavated during the 10th century to provide building materials for the city. Since then, they have been used as cellars, silos, and as air raid shelters during WWII. The Boves were also used as a rallying point, holding camp, and shelter for allied troops during the WWI Battle of Arras.

For the past decade, each spring the tunnels and galleries are put to an altogether more peaceful use; between March and July, they are home to the glorious fantasy gardens of â€˜les Jardins des Boves in Arrasâ€™.

Designed and built by local artists, each year sees a different theme. Previously the Boves have played host to a fantastical musical and visual journey to the centre of the earth, a recreation of the gardens of Versailles, a tribute to French science fiction novelist, Jules Verne â€“ complete with out-of-this world machines, animatronics, and wacky inventions, and more recently, recreations of Asian gardens, complete with Buddhist statuary and symbolism, gently trickling water features, atmospheric music, and tropical plants, such as orchids, bamboos, and pitcher plants.

Each year, the gardens attract over 20,000 visitors who come to marvel at the work of BrÃ©vart and co.; however, the original idea behind the event was to raise awareness of the Boves, and the part they played in the history of Arras. During 1917, for example, a British offensive led thousands of troops, comprising soldiers from New Zealand, South Africa, Canada, and Australia out from the Boves, in which they had secretly been encamped, to storm the German front line on April 9th. The Battle of Arras lasted until May 16th, during which time, over a quarter of a million personnel on both sides lost their lives.

Replete with fantasy elements such as fairies, enormous butterfly dancers, giant cuckoo clocks, and miniature puppet shows, this underground wonderland promises a magical spectacle of sound, vision, and light thatâ€™s not to be missed.