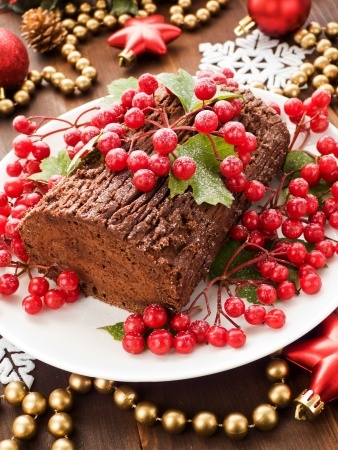 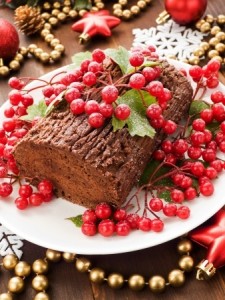 People in France relish the holiday season, and in the weeks leading up to Christmas and following it, you’re apt to come across delicious seasonal desserts.Â  These include the following:

1) BÃ»che de NoÃ«l (Yule log).Â  This is a delicious roulade, shaped like a log and traditionally made of sponge cake and chocolate buttercream.Â  The outer layer of chocolate is often made to look like tree bark.Â  Other ingredients could include powdered sugar, which makes it seem like it’s been dusted with snow.

2) Kouglof.Â  This is a popular dessert in Alsace-Lorraine and reflects the region’s partly German culture.Â  The cake is shaped like a ring (essentially a Bundt cake) and baked with almonds and raisins.Â  It goes really well with coffee on a cold afternoon.

3) Calissons.Â  These candies come from Provence, and in particular are linked to the town of Aix-en-Provence.Â  They’re made of a paste of candied fruit and almonds coated in white icing.

4) Galette des rois (King’s cake).Â  Made in honor of Epiphany in early January, this cake is especially popular in France in the weeks after Christmas.Â  The recipes differ based on whether you’re eating this cake in the north of France or in the south.Â  In the northern recipe, there’s a flaky pastry exterior and an inner core of frangipane.Â  In the southern recipe, it’s a rich, sugary cake with candied fruits that’s baked to resemble a crown with jewels.Â  A figurine is hidden in the cake, and whoever gets the piece with the figurine is ‘king of the day.’Â  Often, the figurine is a baby (to represent Jesus), but there’s really a wide variety in the kinds of figurines people use nowadays in France.

6) Pompe Ã  l’huile.Â  This is another unique dessert from Provence you could find among the region’s Thirteen Desserts.Â  It’s a moist pastry with the chief ingredients of orange flower water and olive oil.

Although these desserts can often be made or purchased year-round, it’s special to eat them in the winter months, given the festive spirit that fills the whole country, with its beautiful public light displays, open-air Christmas markets, and traditional holiday music performed in churches and outdoors by troupes of singers and dancers.

Contact us for more details about visiting France in the winter months and enjoying every aspect of its culture, including its culinary traditions.