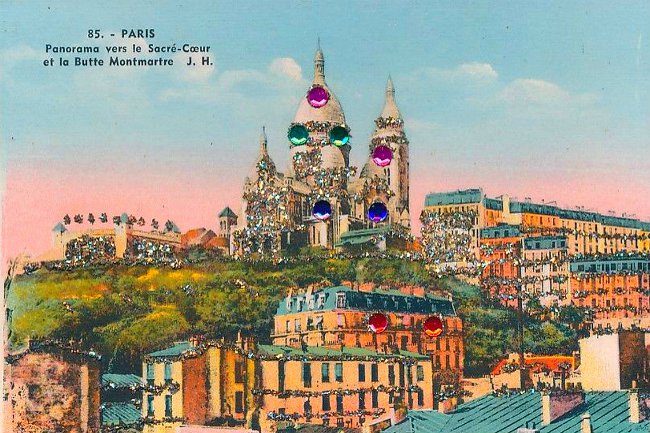 After a week of PyeongChang’s ice skates, glitter, and rhinestones, let’s glide on up to Glitter Central: the Moulin Rouge in Montmartre. That’s right. Get ready for some time travel as smooth as a vintage Johnny Weir solid gold triple axel. He is still my hero. However, did you catch Tessa Virtue and Scott Moir skating to the “Tango de Roxanne” from Baz Luhrmann’s Moulin Rouge soundtrack?  I wept.

Following suit, this fool-for-tulle then made a beeline to Zara to purchase her own bejeweled bodysuit and rhinestone-encrusted boots, perfect for jinxing the writer’s block. Some say, “If you don’t write daily, you can’t win.” I say, “If you don’t dress for the occasion, you aren’t really conquering!” As Alexander Weathers once put it, “Clothes reflect and symbolize our aspirations.”

And then there was Adam

In celebration of the transformative magic of garb and goals, let’s also salute Olympic skater Adam Rippon and his confections by designer Braden Overett. According to my sleuthing, Braden typically glues layers of 3,000 to 5,000 crystals by hand to each ensemble. Meanwhile Adam proves it’s possible to get what you want with wit, witchcraft, tenacity, and a visionary designer. That, and raw athletic talent and thousands of miles of sheer determination on the ice, of course.

Sometimes all that glitters is not gold.

Tonight I got designer Braden Overett on the horn. Here’s how he explained his collaboration process with Adam:

“Adam’s shirts were in process for over a year. It all starts with the music. We discuss the sounds and potential choreography, the feel, and the conversations tend to go all over the place with imagery and references to anything we want to convey. This is where the fun begins. There are no limits to the creative possibilities; we just have to figure out how to make it . . . and in Adam’s case, make it out of skintight mesh! His blue and green shirt weighs more than one and a half pounds. Almost all of that is crystal. Every sparkle on Adam’s outfits are Swarovski!”

But we digress. Reveling in the beauty of self-adornment and apparel, let’s now roll on over to the Moulin Rouge. This jewel of the ’hood also wears it well.

A tale I often tell

“Life is beautiful; here comes the French Cancan!” Toulouse-Lautrec would shout out before the highly charged show within the Moulin Rouge’s pulsating walls. Built in 1889 by Charles Zidler and Joseph Oller, she has remained the undisputed queen of cabaret dance halls and monarch of her neighborhood, Montmartre—where at one time as many as 30 windmills turned “as swiftly as the Parisians’ heads,” according to one smitten Italian poet.

The crowd would rush the stage, forming a tight circle around the cancaneuses. Hemmed in by their aggressively-courted fan base—sometimes six-deep—the dancers performed the quadrille naturaliste, always competing to see who could kick the highest, usually with (but often without) pantaloons underneath their multiple layers of petticoats, before climaxing with a final, exuberant high split in mid-air.

Dancer Jane Avril’s description of the scene reminded me of a poem or perhaps, perhaps my new spring wardrobe wish list: “The dancer’s skirts, some twelve metres in circumference, were of panels and frothy lace, as were the drawers. The effect of the black stockings against this snowy whiteness was to emphasize the shape of the legs.”

Here at the Moulin Rouge is also where Louise Weber, famed terpsichorean and muse of Toulouse-Lautrec, made her debut. In Abbesses-Montmartre, she earned her moniker (“La Goulue”, i.e., “The Glutton”) for distracting onlookers with her pantaloons and little pet goat while swiping drinks and chicken drumsticks from them and gobbling them down.

“When I see my behind in these paintings, I find it quite beautiful!” La Goulue told Toulouse-Lautrec when she saw the impressions he’d made of her.

Singer Yvette Guilbert wrote, “La Goulue, in black silk stockings, made the sixty yards of lace in her petticoats swirl and showed her drawers, with a heart coquettishly embroidered right in the middle of her little behind!”

But Toulouse-Lautrec mused, “When you saw her dance, you forgot her sins.”

The Cancan wasn’t the only dance born at the Moulin Rouge. Legend has it that on February 9, 1893, art students gathered at the music hall for their second annual Bal des Quat’z Arts. At midnight, an atelier model named Mona jumped up on a tabletop, and started removing her garments one by one, as she danced the Fandango, much to the sheer delight of her companions. Bump and grind, Le Strip Tease was born! However, it didn’t tickle everyone’s fancy.

Because haters are gonna hate: Mona got arrested, setting off a series of student protests in the Latin Quarter. After a bystander was fatally injured during one of the ensuing tumults, the government relented and apologized, setting Mona free. Like wildfire, word spread about the new craze, and soon other Paris music halls began adding a little “artistic nudity” to their repertoire of titillating skits, too.

In 1907, writer Colette caused a few commotions of her own when she shared an onstage kiss with the Marquise de Belbeuf at the Moulin Rouge, during her “Rêve d’Égypte” pantomime, and performed topless at the Folies-Bergère. In fact, she was one of the first to bare it all. “Boredom helps one make decisions,” Colette quipped.

Josephine Baker’s 1926 debut at the Folies-Bergère sealed the deal. Wearing only a banana skirt and black Kohl eyeliner by Helena Rubinstein, a star was born.

Despite many major and minor modifications and reconstructions through the years, the Moulin Rouge has steadily flourished. Today a single show may involve 1,000 costumes, 800 kilos of shoes, and 60 kilos of paste jewelry and glitter. The little “Red Mill’s” creaky wooden stage and plaster of Paris walls have seen the likes of Edith Piaf, Elvis Presley, Frank Sinatra, Yvette Guilbert (Madame Arthur), Mistinguett (Queen of the Music Hall), and Cab Calloway—just to name a few.

Indeed, love lifts us up where we belong! So keep on sparkling! As Christian and Satine belted out, from up on the little windmill’s red-tinged roof, “We can be heroes, for ever and ever.”

And if that fails, “Grab your glitter glue stick, hon!” as my aunt Doris would say.

PS. Maurice, thank you for sharing your photograph of the Moulin Rouge.

“I remember taking that Moulin Rouge shot, like it was yesterday. It was a cloudy, overcast day, mid morning. We were standing on the street. Suddenly the gate lifted. I was in the right place at the right time.” –Maurice Sapiro