Why Montpellier is France’s most seductive and underrated city 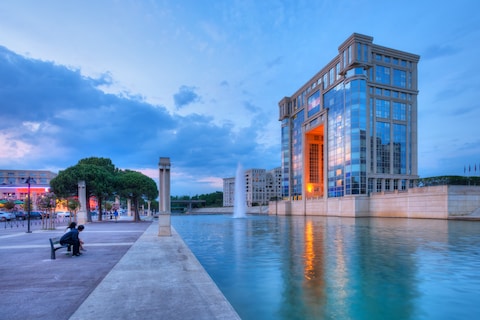 Writer Anthony Peregrine, who lives in France shares memories and his love for Montpellier, one of France’s most charming and French cities!

“Montpellier, the capital of Languedoc, a few miles from the Mediterranean coast, was where I discovered France. Weâ€™ve been in a relationship ever since. Weâ€™ve perhaps matured Â­together â€“ Montpellier into the most seductive provincial town in France, me into an older version of the seducer I never was. Back then, the city was emerging from a lethargic recent past of rentiers, wine decline and sun-lit slumber. I was fresh out of university, so given, too, to slumber and wine Â­decline. With a French future wife, Iâ€™d rented a wooden shack which grew, like a blister, from the roof in question.

Unlike its neighbours NÃ®mes, Narbonne and Agde, Montpellier has no Greco-Roman past. It appeared only in the Middle Ages, owing its notoriety to medical skills born of Arab and Jewish influence. Medical excellence has since been a constant. Founded in the 13th century, the medical school is the oldest still operational in the world. As I visited, it was moving out of these classical buildings. However, the Museum of Anatomy â€“ once a teaching tool â€“ remained.

Fuelled by hi-tech industries, brains and brilliance, the city has spent 45 years or more growing faster than anywhere else in France â€“ from 14th to eighth position, population-wise â€“ while keeping hold of the Med essentials. Elegant, subversive and sensual, it has become the most cultured and tolerant city in France. Ambling visitors abound, thank heavens.