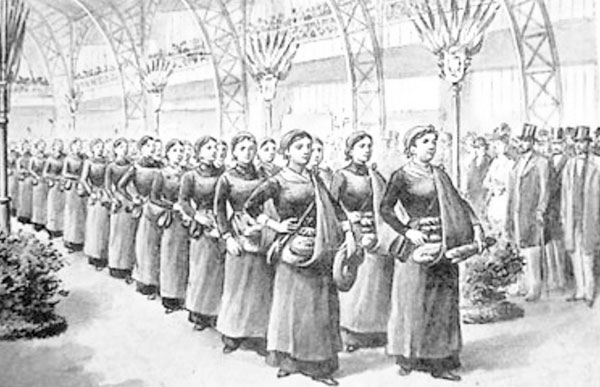 If you like bread, then when youâ€™re in France you probably stop by the boulangerie every day to buy a baguette, croissant, or one of the other tempting treats that you will find inside. But if you were a bourgeois, or wealthy, family in the nineteenth or early twentieth century and lived in a town, you wouldnâ€™t need to. Your daily bread would be delivered before you even got out of bed. In some parts of rural France bread deliveries to homes still takes place but these days itâ€™s by van.

The bread delivery ladies of France

In days gone by, the job of bread delivery usually fell to women who were called les porteuses de pain, which means bread delivery women.Â These ladies would start work in the early hours of the morning â€“ as soon as the bread came out of the oven. Some delivered the bread in baskets or wooden frames carried on their backs, others carried the bread in their large specially designed aprons. The lucky ones worked for bakeries that provided pushcarts.

These hard-working women would have up to 300 clients and had to memorize all the addresses and the amount of bread required. In apartment blocks they werenâ€™t allowed to use elevators â€“ they were for residents only. It must have been a tough job.

La Porteuse de Pain is the title of a book written by Xavier de MentÃ©pin. It started as a series in a newspaper in 1884 and tells the story of Jeanne Fortier, a young widow with two children who is wrongly accused of murder. She goes to prison for 20 years and later in her life becomes a porteuse de pain, a bread delivery woman. She has many adventures along the way, trying to track down her children, searching for the real murderer, etc. This popular story has been adapted for theatre, inspired six films made between 1906 and 1963, and became a television series in 1973.

The post Give us this day our daily bread in France | Les Porteuses de Pain appeared first on The Good Life France.