France Wine Tours: A Trip Along the Alsace Wine Route 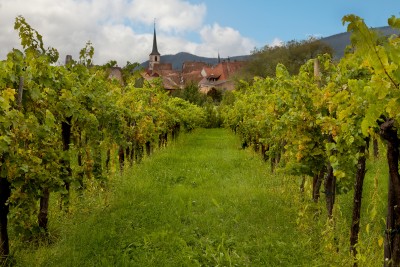 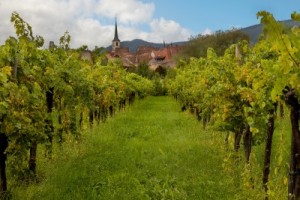 Wine village and vineyards in the Alsace region in France

Alsace is known for its French-German fusion culture, something that sets the region apart from other areas of France. Along with the influence that Germany has had upon the dialect and cuisine of Alsace, the wine in the area has maintained its own distinct palate that combines the tastes of Germany and France. The historic wine route that winds along the countryside of Alsace is known as one of the most famous of all France Tours.

The beauty of the Alsace wine route resides in quaint villages, rolling hills and family-owned wineries. Among the vineyards and caves, these towns are just a few must-see stops out of the many little treasures throughout the route. The medium sized village of Colmar embodies the spirit of Alsace, with its colorful germanic buildings and winding canal. The smaller towns Eguisheim and Ribeauville are renowned for their medieval architecture and stone carved architecture. Mittelbergheim and Barr stand as the gastronomic capitals of Alsace, with Barr being considered the wine capital of the area.

In addition to knowing about the scenic towns on the Alsatian wine route, a general knowledge of the wine itself will serve as a useful base for all that there is to be learned. Alsace uses seven official different types of grapes. All of these produce white wines, with the one exception being a red Pinot Noir. Alsace is famous for producing dry white wine, including the most famous of all Alsation wines: Riesling d’Alsace. Other favorites include the CrÃ©mant d’Alsace, a sparkling white wine, Muscat, and Pinot Blanc. These are fresh, light wines that can be paired with a variety of food. Chasselas and Slyvaner are two white wines that are known for their history in Alsace, along with Pinot Blanc. The Edelzwicker is a combination of multiple grape varieties, a method used by many wineries throughout France.

As 2013 marks the 60th anniversary of the Alsace wine route, much adventure and tasting awaits. Contact us to become part of the celebration and immerse yourself in the distinct taste of Alsatian wine.