The Eiffel Tower is the most recognizable landmark in Paris and is known worldwide as a symbol of France. Named after its designer, Gustave Eiffel, it is a premier tourist destination, with over 5.5 million visitors per year. The tower received its 200,000,000th guest on November 28, 2002.

The structure was built from 1887-1889 as the entrance arch for the Exposition Universelle (1889), a World’s fair at the centennial celebration of the French revolution. It was inaugurated on March 31, 1889, and opened on May 6. 300 steel workers joined together 18,038 pieces of steel, using two and a half million rivets. Considering the safety standards in place at the time, it is remarkable that only one worker died in the construction of the tower, during the installation of the lifts (elevators).

The tower is 300 metres tall, (986 feet), not including the television antenna on top, which adds another 20 meters, and weighs over 10,000 tonnes (over 21,000,000 pounds). When it was built it was the highest structure in the World. Maintenance on the tower includes 50 tons of dark brown paint every 7 years. Depending on the ambient temperature, the Eiffel Tower will change height by several centimetres because of contraction and expansion of the metal.

Perhaps predictably, the tower met with resistance from the public when it was first built, many thought it would be an eyesore. Today it is widely considered to be one of the most striking pieces of architectural art in the world.

One of the great Hollywood movie cliches is that the view from a Parisian window always includes the Eiffel Tower.

Originally, Eiffel had a permit to leave the tower standing for 20 years, but as it proved valuable for communication purposes, it was allowed to stay after the end of the permit.

See the Eiffel Tower from above, 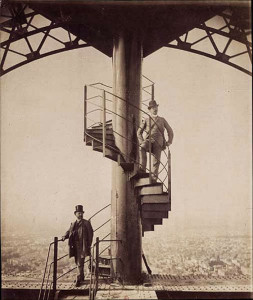 Gustave Eiffel (bottom) proudly poses at the top of his tower.

Planning to visit The Eiffel Tower?

Join our tour and visit the Iron Lady at night!