The French Belle Epoque in Film 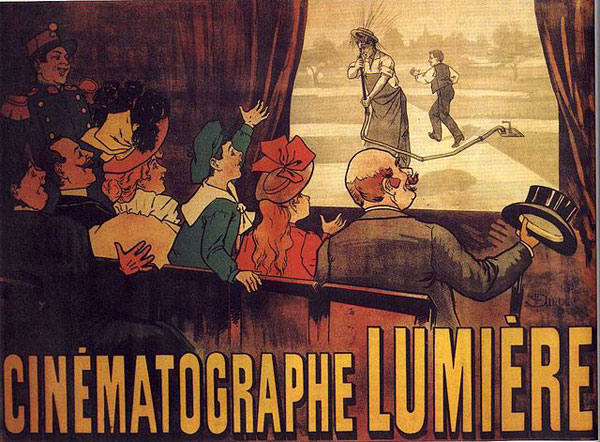 The post The French Belle Epoque in Film appeared first on The Good Life France.

The ‘belle époque’ was a period of French history. It occurred during the decades from the late 19th century (1880s) to the outbreak of the First World War. It was a time when there was a flowering of culture, fashion and the arts among the French bourgeosie (middle classes). Paris seemed to be full of charming boulevardiers, all looking like Maurice Chevalier as he is depicted in the Hollywood musical Gigi, and beautiful women driving in open-top carriages whilst exchanging witty repartee about life and love.

The belle époque has been celebrated in books and film ever since the invention of café society, and the kinematic camera made moving pictures possible. Writers such as Colette developed the idea of the independent woman free to carve her own career as men did with accompanying affairs, entanglements and multiple marriages. Artists such as Toulouse-Lautrec pushed the boundaries of painting, giving birth to modern art in the bars and bistros of Montmartre. The performers of the Moulin Rouge developed risqué revue theatre frequented by figures from high and low society including the future King Edward VII when Prince of Wales. In the long history of the link between the ‘Moulin’ and high society there is a story of a famous dancer spotting the then Prince of Wales, known as Bertie, in the audience. She cried out across the floor “hey Wales, the champagne is on you”. 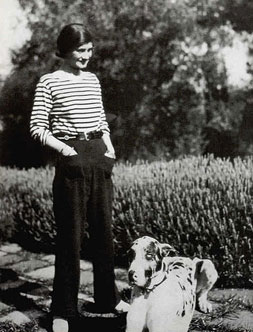 Nearly forty years after her death aged 88 a French language film starring Audrey Tatou, focuses on the early life of fashion icon style guru, provider of perfume and accessories to generations of women and doyen of sophisticated taste, Coco Chanel.  The film is a biopic which tells the story of how a seamstress with the nickname Coco, abandoned by her father in a school run by nuns becomes the legend that is Coco Chanel, by way of a tour d’horizon of French social history in the first three decades of the 20th Century. Coco rises from oppressed seamstress, working for a pittance by day and singing risqué songs by night to drunken café revellers, to mistress of a well-meaning but dim-witted aristocrat.

The developing Coco style can be seen in clothing and hair as the ingénue develops confidence and an emerging élan.The audience goes on a journey with her, through heart break, at losing the man she loves in a car crash and passion for the work and business which becomes her driving force. The closing scenes are a montage featuring the Coco Chanel that the world came to know so well in her salon, dressed to perfection in the style she made her own, symbolising grace, elegance and wit for millions. Coco Chanel was truly a daughter of the belle époque, independent and proud.

Another biopic of a French legend, La Vie en Rose features Marion Cotillard and featuring a cameo performance by Gerard Depardieu.The film charts the rise to fame of the singer/chanteuse Edith Piaf. It is a story of triumph over adversity, with much heartbreak along the way. Born into desperate poverty the singer who would win the affections of the world with her heartbreaking, tremulous yet powerful voice. The film follows her journey in early 20th century France through brutal circumstances and oppressive relationships, battles with drug dependency and ill-health. Depardieu plays the nightclub owner who discovers the street singer, takes her under his wing and promotes her talent as well as giving her the name by which she would be known the world over – Piaf or “sparrow”. Tragically he is killed in an underworld revenge attack and Piaf loses her protector and source of loving comfort, having no parents from an early age. The music provides the backdrop, theme and is a central character of the film in many ways. Piaf embodied the lives of the street people about who she sang in haunting songs and these melodies flow through the film.

Three songs that Piaf made her own and with which she will forever be identified are the song of the film’s title, La Vie En Rose; Hymn a Lamour (Hymn to Love) and Les Trois Cloches (The Three Bells). Perhaps the seminal cinematic moment in the film comes when Piaf is played the tune that will be become her signature. A young songwriter comes to the singer’s rooms at a time when she is ill and full of sorrow at the death of her boxer lover Marcel Cerdan. He plays the opening bars of Je ne regrette rien. Piaf instantly recognises that this is the song that encapsulates her life and with this realisation comes the determination to carry on. The film ends with her collapse on stage which presaged her death – sad but uplifting, mournful yet hopeful.  An inspiring life of hope transcending adversity. Another heir to the belle époque tradition.

Starring Nicole Kidman and Ewan MacGregor. It’s a remake of a 1920s film about the famous Parisian nightclub set to a modern pop music score and put to cinematic fanfare treatment by Baz Luhrman renowned for his distinctive cinematic style mixing special effects, live action and a magical realism fantasy that is all his own. MacGregor plays the love-sick, absinthe-drinking writer who takes to his attic in the City of Light to pine for a showgirl dancer at the Moulin Rouge. With lively production numbers, the ring-master played with great verve by British character actor Jim Broadbent and Nicole Kidman at her most teasingly provocative as the Moulin dancer, the old story is told thrillingly for a late 20thCentury audience with all the flair, pizzazz and showmanship. 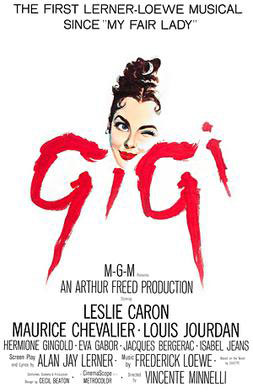 Hollywood movie adaptation of the Lerner-Loewe stage musical about the life and loves of a French girl destined to be a courtesan in the belle époque era. It stars  Leslie Caron, a ballet dancer turned actress, as Gigi. Louis Jourdan is the bored playboy who pursues her. Celebrated entertainer Maurice Chevalier plays an aging boulevardier who observes the scene with a wry smile and a knowing look. British actress Hermione Gingold is Gigi’s mother with big ambitions.

It is a boulevard comedy, rather in the style of the farceur Georges Feydau who wrote the late French Empire play The Lady from Maxim’s. It follows the girlhood, growing up and flowering of the Gigi of the title. Taken from a short story by the writer Colette, Gigi is destined to be the companion of wealthy men of one type or another. The playboy at first flirts with Gigi and later realises he is in love with her. The music score is penned by the duo who gave the world My Fair Lady and the score features classics such as Thank Heaven for Little Girls, The Night they Invented Champagne and I’m Glad I’m Not Young Anymore. Gigi won thirty Academy Awards (Oscars) in 1958, more than any film up until that time, and legend has it that the singer Tony Martin forgot the lyrics to the title song, only remembering the opening word of it: Gigi…

All this provides the backdrop for Chéri (2009) Starring Michelle Pfieffer it tells the story of society hostess and courtesan who befriends, seduces and falls in love with the son of a sister courtesan. It is a tale dealing with the eternal themes of love, obsession, the ravages of time, the attractions of youth and the hypocrisy of society.  The older woman takes the younger man ‘in hand’ on the understanding that she is preparing him for marriage and the life his situation demands of him – respectability through marrying well and playing the game. Love intervenes, surprising both parties, but convention and circumstance dictate that he must return to his emotionally stifling marriage and she to her independent existence.

William BR Jeremy is a writer, producer and researcher with a background in freelance feature writing and broadcast production for the BBC, community radio and the monthly press.

The post The French Belle Epoque in Film appeared first on The Good Life France.